What Government Digitalization means for Aruba

ORANJESTAD – Recently the Minister of Spatial Developments, Infrastructure and Environment became the pilot ministry connecting all its departments on the digital platform.

According to Minister Otmar Oduber, digitalization is not an easy process considering the conventional use of paper within the government for many years. The internal transformation to digitalization comes with challenges for those used to the work with the traditional paper system. The goal is for external processing to be digitalized as well by December 1, 2019, which means hard copies are no longer required when submit a document to the government. 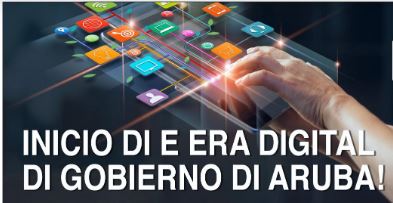 The focus now is on the internal processing between departments, organizations, Sui Generis entities and public limited companies (NV’s) resorting under the Ministry for Spatial Developments, Infrastructure and Environment (MINROIM). That means that all agreements and advice will be digitally processed. This traduces into more efficiency, higher productivity, and synchronization between departments. The document's security is guaranteed by having digital backups. One department will safely keep a single hard copy of each document.

Another benefit of the digitalization is the ability for the Minister and department’s directors to track documents. The document management system “Decos Join” will indicate that the employee has five days to handle a document. In case the five day period expires, an orange flag will appear indicating the document should be handled in the next five days, and if this does not happen, a red flag will show and the case will be forwarded to the director to either extend the time frame or hand the case to another employee. This gives the directors a much better control system, while the Ministers also have an overview of what is going on in their departments.

The digitalization should create a more efficient workplace and increase in productivity. In the digital era, the Government has to keep up to provide proper service to the community.

We work together on an informative, accessible and user-friendly Government Portal for Aruba.
Report something? Click here